Completely Out Of My Mind

We are now just ten days away from a partial solar eclipse of the Sun that should be visible to everyone in the US and Canada. Mark your calendar for October 23. It should be a pretty good one for San Francisco – good being measured by how much of the Sun’s face will be shielded from our view by the interloping Moon.  In San Francisco, the Moon will block a bit less than half of the Sun. Weather permitting, we’ll see maximum coverage of the Sun at 3:17 pm:  (http://www.timeanddate.com/eclipse/in/usa/san-francisco):

Here is some more helpful information for San Franciscan’s wondering what to expect:

Canadians living in the west and far north will get the best view.  The Sun will be reduced to a mere sliver for them.  Here is a NASA annimation showing you what you might expect to see. The lighter shadow is the location of the Moon’s shadow as it passes across the Earth (the partial solar eclipse).  The darker shadow is night on Earth.

But no matter where you are, don’t look directly at the sun  Really – don’t.  DON’T!

It’s never a good idea to look directly at the Sun, but the problem with partial eclipses is you might think its safe to take a peek. After all, half the Sun’s face is covered up so it must be safe to look, right? WRONG.

Truth is, the Sun is so bright that even when you cover most of it, there is plenty of energy left to burn your retina and cause permanent eye damage.  SO DON’T LOOK DIRECTLY AT IT.

Good news.  There are lots of safe ways to look at the Sun during a partial solar eclipse.  Here are a few methods for looking at the Sun INDIRECTLY you can try on October 23.

1. Find A Tree:  This one is my favorite.  Find a tree with lush foliage and look at the ground in the shady areas just beneath the branches.  On any sunny day, you might seen the ground or a nearby wall sprinkled with round patches of light. Each of the round light spots is an individual image of the Sun made by the tiny spaces between the leaves that act like pinhole camera apertures. During a partial eclipse, you will see hundreds of images of the crescent Sun. It’s absolutely stunning!

Pinhole images of a partial eclipse under the leaves of a bamboo tree.

2. Use Your Hands: Don’t have a tree nearby?  No problem. You can also use your hands and fingers to to make a “pinhole grid”. The holes between your fingers will act just like the spaces between the leaves of the tree.  Hold your hands high above your head and look on the ground. You should also see multiple images of the eclipsed Sun. 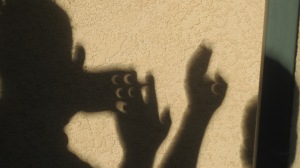 Using the tiny spaces between your fingers to cast a pinhole image of the eclipse on a wall.

3. Put a Box on Your Head.  Find a cardboard box that is large enough to cover your head and allow you to comfortably look at a sheet of white paper that you will tape to the inside of one of the interior walls.  Cut a postage stamp size hole on the opposite side of the box an cover it in aluminum foil.  Using a push pin, make a hole in the foil.  Point the pinhole at the Sun and you should see an image of the eclipse on the sheet of white paper. If the image is too dim, try making the hole a little big bigger.

For other ways to observe the eclipse, see Sky and Telescope: http://www.skyandtelescope.com/astronomy-news/observing-news/partial-solar-eclipse-october-23-2014-10062014/.